3 When Judas, his betrayer, saw that Jesus* was condemned, he repented and brought back the thirty pieces of silver to the chief priests and the elders. 4He said, ‘I have sinned by betraying innocent* blood.’ But they said, ‘What is that to us? See to it yourself.’ 5Throwing down the pieces of silver in the temple, he departed; and he went and hanged himself.

I’ve always been unsettled by the stories about Judas, and what follows was written in an attempt to explain why. Good Friday is an uncomfortable day, as it’s the one day when we’re asked to be introspective as we look up at the cross. We’re challenged not only to see Jesus hanging there, but we must be brave enough to see on the cross all those whom any of us have, at any time, rejected, excluded, bruised, damaged.

That’s what makes Good Friday such an uncomfortable day. We find ourselves condemned; we’ve all contributed in different degrees to the tragedy of Calvary and we continue to do so daily. We’re all of us made of stardust and we shred God’s image in us every time we act spitefully or aggressively towards others who are, just as much as we are, made in His image. 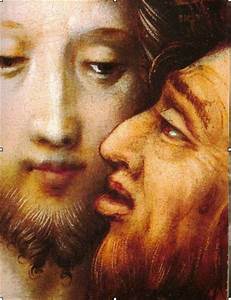 If you look at pictures of me in art over the centuries, you’ll see me always as the object of hatred – I’m generally the one on the edge of any paintings. Jesus is centre stage, with his other disciples surrounding him and hanging on his every word. I’m the one looking away from Jesus, with a sinister look on my face, with an exaggerated hooked nose and a yellow complexion. Does anyone care that my portrayal has contributed to anti-semitic attacks on Jews over the centuries? Well, does anyone?

But, wait a minute, what’s that I hear you say? That I betrayed the Son of God? That I took action that led to the brutal murder of Jesus by a baying mob? Well, aren’t you forgetting something? What about the fact that Jesus said that I was chosen to fulfil the scriptures? Did I choose freely to betray Jesus? Tell me, if you can work it out.

Do I hear you saying that I betrayed Jesus for money? That might sit very well with you in your modern world, and so allow you to add avarice to my other long list of immoral acts. But thirty pieces of silver is hardly a banker’s bonus, and in any case, as you just read, I threw it back at the feet of the chief priests and elders. I’m not going to make it easy for you if you want to see me as an unprincipled man acting out of greed and self-interest. You’re going to have to work much harder than that.

I’ve also gone down in history as the man who betrayed his Lord with a kiss. But think about that for a moment, if you dare. If you rank all the dreadful crimes you’ve ever heard about, where does identifying someone wanted by the authorities sit? Exactly. It’s hardly equivalent to genocide, or murder or sexual abuse, is it? And in any case, has it crossed your mind that it was really dark that night in the Garden of Gethsemane; that in the days before, I’d had to work hard to get the Chief Priests and authorities to look for a time when Jesus could be arrested without lots of innocent bystanders being hurt in a riot? And tell me, if you can work it out, how you think it would it have helped Jesus if an innocent man had been mistaken for Him in the dark and seized in His place?

So I go back to what I said at the start. Can you imagine what it’s like to be me? No, you can’t. You see, if you really want to try to understand me, you can’t just see me as a caricature of evil, as a stereotype of Satan; as a mixture of all the most foul and wicked people you’ve ever met. It won’t wash. I’m human like you. I was also made in the image of God, like you. I was, (never, ever allow yourself to forget this), hand selected by Jesus to be one of his beloved twelve disciples. And I gave up everything I had to follow Him. Jesus expressed the most magnificent dreams I’d ever dared to dream; he encapsulated every prayer I’d ever prayed, the holiest thoughts my heart had ever conceived; He was a living representation of every ideal I’d ever dared to visualise. Jesus was opening up a new world; the world each and every one of us Jews had longed for, since the time of Moses; a world where there was no injustice, no starvation, no violence and no domination of one person by another. That’s why I couldn’t understand, when Mary the sister of Martha and Lazarus, brought perfume worth a whole year’s wages, at least £20,000 in your money, and put it all on Jesus’ feet. I couldn’t believe that Jesus didn’t want to use this enormous amount of money to do more good work among the destitute and starving. Think of all the good you could do with £20,000 in your world! And now imagine that your streets are packed not just with homeless people, but with men, women and children without shoes or proper clothes and who don’t know where their next meal is coming from. I started to think I’d misunderstood him. Now look me in the eye and tell me that you’d never have had those worries; you’d have been happy to see £20,000 wasted before your very eyes. I allowed myself to start to believe that the Jesus I’d followed who’d held out such wondrous hope for mankind, was nothing more than yet another self-serving leader, keen to develop his public relations and be worshipped, as celebrities are in your world. That’s why I told Caiaphas that I’d help him bring Jesus in; I was sure that Caiaphas and all the other members of the Council would prevent Jesus from becoming yet another leader out for self-aggrandisement. They’d get him back on the right path; that was what they promised me.

And then, when it was too late, I realised that I’d been duped by them, Jesus had been condemned and crucified and I’d betrayed innocent blood.

Can you imagine what it’s like when you suddenly realise that you’ve done something so hideous, so loathsome, that hell itself is ashamed? I returned their hateful money to the temple authorities; let it dirty their fingers the way it had dirtied mine, I thought. Let it act as a permanent reminder to them of the way they’d lied to me. Letting go of the money didn’t solve the problem. As I’m sure you can see, it never was about money.

Do you know what hellfire is? It’s the light of God’s unbearable innocence that sears and shrivels you like an inferno. It shines into your very soul, showing you as you really are, to anyone who wants to look. It’s the bottom of the pit, where you know you must lie for all eternity, with nothing for company other than your own self-hatred.

I’ll tell you what it’s like to be me. I’m a representation of all your weaknesses. If, in the centuries since my death, some theologians have proposed that all your sins are borne by Jesus on the cross, then all your smugness; all your self-justification; all your selfishness and all your judgmentalism are borne by me.

So, I ask, as I must to anyone who passes by here: can you imagine what it’s like to be me?

One thought on “Judas Iscariot and Good Friday”